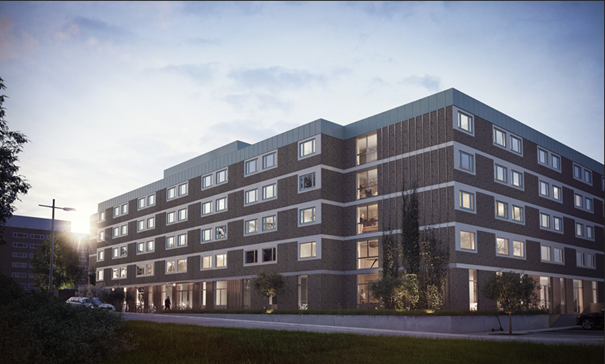 The renovation and refurbishment of the Familjebostäder building at Kustgatan 3 began in spring 2021. On the first two floors, which were previously offices, 44 new apartments are being built, and Inhouse Tech has been appointed construction manager.

But let’s go back a few hundred years. The Kustgatan 3 site has quite a diverse history. In the 18th century it was home to Bellevue Manor, linked to the Gothenburg shipyard and the Swedish East India Company. When public elementary school was made obligatory in Sweden in the 19th century, the estate became the Hasselroth School.

The current property was erected in 1968 and was originally a bachelor’s hotel. It was called ‘Hotell Klippan’, and was mainly intended for homeless port workers. In the late 1980s the building was converted into offices and apartments.

Today the property is owned by Familjebostäder, now conducting extensive renovation and refurbishment. The old office spaces on the first two floors are being made into 44 new apartments, primarily small, well-planned one-bedroom homes along with a few studio apartments. The existing apartments are also being renovated, and about 30 are being turned into sheltered housing for people over 70. Residents in sheltered housing live in a regular apartment, but have access to smart solutions to improve safety, security and convenience. The apartments can be made more accessible and adapted with electronic peepholes, cooker monitors and support handles.

The project also includes new windows and facade sections, a new common area, laundry room, store rooms and a cycle store, which will also include a bicycle pool. The upgrade of the inner courtyard and outdoor spaces will be supplemented with more lighting and seating, as well as solar panels mounted on the roof.

The aim is to make Kustgatan 3 a digital, sustainable, smart building with common spaces for co-living concepts.

The project is expected to be completed towards the end of 2022.